FIRE OF LOVE - THE ULTIMATE SEQUEL . 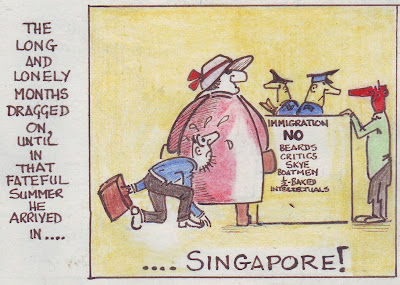 Checking into Hotel Singapore can be a nerve wrecking experience.  In the old days, circa 1970/1980s they would look up your name  in a big black folder - look you over sternly and you wait in apprehension for the stamping of your passport which affirmed that you are kosher enough to enter Fortress Singapore.

Much has changed for our hero since he left Singapore in the late 6os.  He had transformed from this ...... 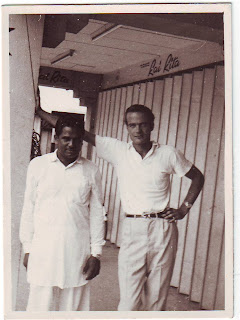 ....... to this, with a bit more fur on the face.
Also "The Skye Boat Song" had become his trademark serenade since a holiday on the island of Raasay, just off the island of Skye.  As for "critics and half-baked intellectuals", they are not welcome anywhere.

As soon as he left Paya Lebar Airport our hero got busy on his fieldwork - he was after all on sabbatical leave from his university. 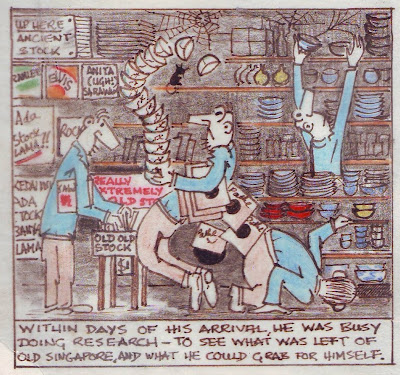 He extended our 1930s-1970s collection of Malay records - to complement my own treasure hoard of Malay EPs, 10 inch LPs, 12 inch LPs and 45 rpm singles of Singapore's 1960s pop groups like the Crescendos,  Naomi and the Boys, Henry Suriya, Heather and The Strollers.

He also made additions to our  cache of Chinese bowls and plates, the everyday domestic crockery that was in use from the 40s/50s - not Ming and Sung vases though. 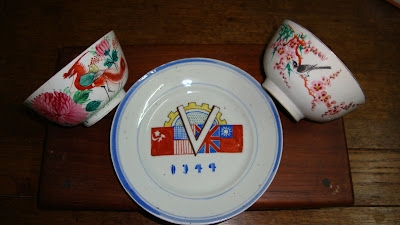 The 1944 plate in the middle was a fascinating discovery.  There was the V sign over the flags (from left to right) of Russia, USA, Britain and China  (Kuomintang China?) .  The girl who sold him the plates was given a good ticking-off by her mother - she (the mother) did not want to part with them at the price charged - when she saw what the customer was. 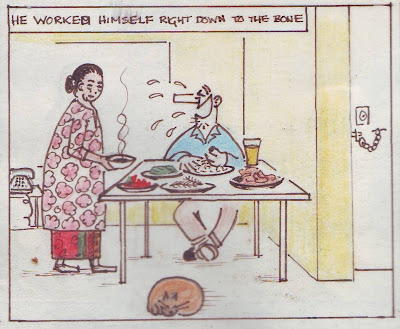 My mum was on hand to see that his energy level was  topped up with sambal petai ikan bilis, rendang, sambal goreng tahu/tempeh and of course sambal blacan.  For pudding there was always naga sari.  My mother made the best naga sari north and south of the Causeway.

In true Malay fashion our hero washed his hands before eating. How I screamed with laughter when he said to me mum,  "Mak, saya sudah mandi tangan."  The old lady had to stifle a giggle and corrected him,  "Basuh tangan Iain, bukan mandi tangan."   Often, I am told to 'Tutup atas' when I remind him of this linguistic bungle.

He then departed to Sabah to conduct the real fieldwork.... 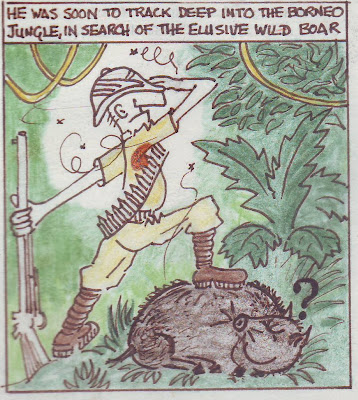 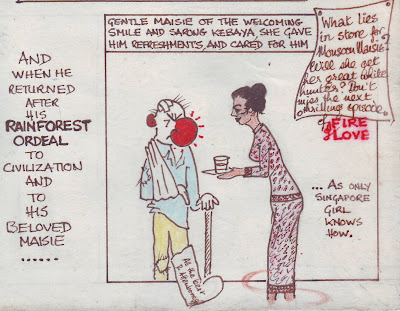 BACK  ISSUES  OF  FoL

i recognise the Boon Lay flat !!

i really enjoy the drawings - so wonderful and funny !

That flat housed a lot of happy days, didn't it?

Agree with PH on your drawings..
interesting fire you have there.. honest!
but that "tutup atas".. kurang fahamlah pulak!! ;))

I wish I could take credit for the drawings - they are the spouse's. I am only the 'batu api'!

As for 'Tutup Atas', it's another example of our wacky translation system. It means 'Shut up'. I know .... just don't roll up your eyes in helplessness.

Itu lah sayang! What a wonderful song to a beautiful story....and not forgetting the drawings :D

Glad you like the song and Unc's wacky drawings. There were so many beautiful songs in that P. Ramlee movie "Anak Ku Sazali"