AsH's biosystem is down again.  It was hacked by the same virus as last year's , causing hacking coughs and many aches and much frustration for a geriatric who wants to squeeze in a lot of living in KL before September.  As a result, I could not make it to Singapore for Tanjong Pagar's shutdown - 'twas one of the reasons I came back this time.

Last year I sought treatment from Klinik N...... up the hill. Despite me telling them that I had an allergy to penicillin, the two quacks were obviously not savvy or careful enough to give an alternative antibiotic.  The infection went on for 4 weeks accompanied by an allergic rash that made my life such a misery  for much longer.  Finally, Tung Shin Hospital's Outpatient Clinic sorted it out with steroids - a treatment I try to keep at arm's length - but I had no choice.

This time I knew where to go.  But the Yellow T-shirts' Walkabout stopped me in my tracks.  There was no way we could get to Tung Shin during that weekend.

Our street-cleaner friends, Aisha and Osman could only balik kampung - to visit her sick mother - by jumping from one local bus to another so they could get to Kampar.  They could not get the usual Express Bus, which would have saved them an additional 2 hours of travelling!

There must be loads more stories of  disruptions and chaos for the ordinary folks who have no time for the brouhaha on KL's streets.  And when I saw on TV the big guns, who had been comfortably ensconced in the luxury Hilton Hotel, making a big tamasha  (a spectacle or show in Hindi) at Central it made me see red.

When we were learning the rules of crossing the road during primary school we were taught this little song.

Red, yellow and green,
The traffic lights are seen.
The red says we stop.
It stands at the top.
The green stays below.
It says we may go.
The yellow stays right in between.
(It) says, wait for the red or the green.

At Pasir Panjang English School, we  coined another colourful ditty, a 'war-cry' in the battle between the Red House, Green House and Yellow House for supremacy on Sports Day. 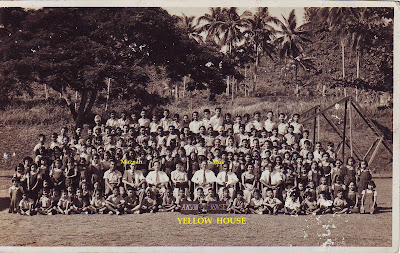 How symbolic I thought!

Through my swollen red-eyes (because of the head cold) and a head full of phlegmy gunge I visualized several types of yellow bananas in that pageant at Central.  There was Pisang Rastali, a Pisang Berangan with headgear, and a Pisang Raja draped in short-sleeved shirt a la  David Beckham's or Prince William's summer style.  There was one member of that distinguished entourage, tucked away discreetly at the rear, who was not in yellow.  Perhaps that was the Pisang Goreng.

I told you my head was clutched in a tight vice because of the infection.  I was hallucinating bananas or was I going bananas?

Anyway we did get to Tung Shin on Monday but then the Internet gave up the ghost the same day.  And I also lost my voice on that day , much to the spouse's joy.

Now i know why you asked about goleng pisang.

But you weren't much help, were you? You only know how to eat them!

Kak AsH,
Get well soon. I missed your writing. I kept visiting yor blog the past few days but saw you havent been updating it. Glad to see a new posting today!
Regarding this Bersih thing, I think it has divided Malaysians even further. The "hatred gap" is wider than ever. The pro-opposition hated the pro-BN and vice versa. Now the political sense in ordinary people are so charged-up, it is like a time bomb ticking away and waiting for just that right moment to blow off. The royal-forbidden walk had done more damage than the good things they demanded in the first place. It is the "the end justifies the mean" type of mentality.Doesnt matter what happen to this country...never mind the biadap attitude towards the Agong... so long as they can show their "power" by going to the street. They claimed victory with the 50k odd people who "braved" the walk. But they forgot there are 20 million more people staying at home.
I really dont know what is going to happen to this country...this politics of hate is disturbing. It is not good to this country. It is just one man's lust to grab the throne. That is what it is all about.
Sorry to hear about your allergic reaction to penicilin. I am also allergic to penicillin...every time I take it, my lips are swollen and I got rashes (like demam campak) on my body. I have got it a few times with clinics here in KL...somehow they dont bother to read the medical records to see what your allergies are.
Becareful next time Kak, sometimes it is not just penicilin but the whole of the "penicilin family" (which are named differenly) that you may be allergic to.
Anak Pak Deris

Thank you so much for your much welcomed comment.

I know I sound flippant in the way I portray the Yellows. My heart sinks in despair every time I think about what's happening to the Malays. They have split themselves in three while the other 40-50 percent remain strongly united and purposeful.

Our bangsa have lost their jiwa to modern self-serving greed, to westernization and arabism. We are afraid or embarrased to be Malays.
We tag the western style and arab wrappings to our psyche and daily existence so as to stand out and be counted.

We know of the Malays who speak Malay with a western slang - and how P. Ramlee mocked them! A few nights ago I heard on TV a Malay lady lecturer who spoke her mother tongue with an Arabic affectation!

Whither goest our people? It's depressing.

As to our allergy to penicillin, I think doctors in this country do not take it seriously and do not bother. I have always tried to keep away from antibiotics and I don't believe them when these doctors claim they are safe for people like us.

There was once in NZ, some time ago, when the doctor gave me the correct substitute. I'll try to see if I can get hold of the name. By the way, the young doctor (again a woman) up the hill told me last year they do have the right alternative but they don't stock it because it's expensive!! That's the crux of western medicine and our western-trained doctors - MONEY!

Thank you for being a patient and loyal reader. I have tons to write but sometimes the nitty-gritty of everyday life takes over. Who ever said that pensioners have more time on their hands!

You take care of your health so you do not have to fall back on antibiotics.

You know, for over 25 years in UK, I have never needed a dose of antibiotics except for after my hysterectomy in 1986.

And again, thank you.

Thank you for your warm wishes.

InsyaAllah, I should be in good nick soon.

Hello Kak, am a TV producer and we're editing a little segment for C Kunalan the Singaporean sprinter and he also went to Pasir Panjang English School. Would it be possible to use 1 picture from your collection for our tv show? will credit you for the permission! let me know? Melvyn@captivate.sg

Hello Kak, am a TV producer and we're editing a little segment for C Kunalan the Singaporean sprinter and he also went to Pasir Panjang English School. Would it be possible to use 1 picture from your collection for our tv show? will credit you for the permission! let me know? Melvyn@captivate.sg

Thank you for checking with me. Of course you may use the photos but do mention that they were taken from the PPES School magazine Co-Ed.

I do remember Kunalan, but not much. PPES was a wonderful school, a truly, truly multi cultural school and with some of the greatest teachers in the world!!

I would appreciate if you could let me know how I can get a look at your finished product.