Picture by courtesy of Pickled Herring - see this
The Simpoh Air is a large evergreen shrub which normally grows in thickets and can grow up to 7m high. Normally found in secondary forests or belukar this plant has many medicinal and commercial uses. But for the kampung folks this plant is useful for its leaves for wrapping food. In fact it is mainly used for wrapping tempeh, which is now a well-known health food sold in western health food stores that are worth their salt. Hence the Malays , especially in Singapore call this the daun tempeh or tempeh leaf.
And yes, I have to clarify that tempeh is a Javanese food for I dare not incur the wrath of Mustar Bonaventura and his Benteng Alliance in Indonesia!

Our breakfast, before we left for school, was usually quite substantial. We, or rather our mother was lucky because we could depend on our neighbour, Makcik Mani who sold lontong and nasi lemak from the kitchen of her house which was located just across the river, the Sungai Nipah. I can still taste the flavour of her lontong today. Each time I go to Singapore I search for lontong - but nothing can match Makcik Mani's.
For this breakfast, my sister would be sent out early in the morning, about sixish to Makcik Mani's kitchen. She would already have had her bath and be ready in half of her school uniform- which consisted of a school blouse and petticoat. The pinafore was put on just before departure to school because we must not crumple our uniform, must we? We were such fusspots then. 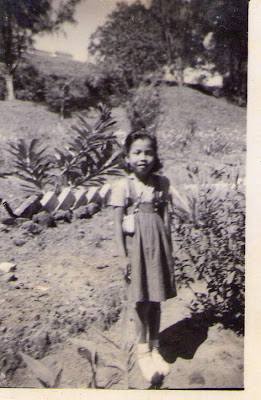 Maznah - all dressed up for school.
My main task in the morning was to get our youngest brother Akim ready for school. I had to check that his shirt was properly tucked into his shorts , that he remembered to put on his school badge for that was a major offence if the school prefect caught you without it. Also I had to comb his hair which he found quite irritating. This was what he looked like after I was done with him. Poor kid! 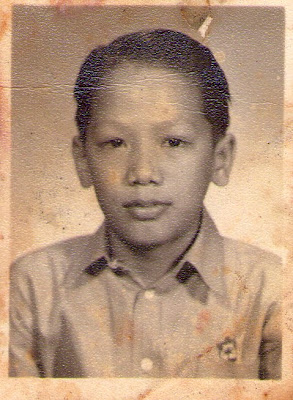 My well-scrubbed little brother!
There were times when we were each given 10cts pocket money for recess time though that was not quite enough for a plate of mee-siam. However mother made sure we did not go hungry. She would pack us a meal of rice, long beans and a wedge of omelette - our bekal. First she placed the daun simpoh/daun tempe on a piece of paper. Then she spooned the food on the leaf and then wrapped it up tightly held together with a rubber band. Our drink was teh-O (tea without milk)decanted into a bottle which had a rolled up little piece of paper stuffed into the mouth of the bottle to serve as a bottle top.
Mus and I (this was before Akim started school) were too embarrassed to be seen unwrapping our newspaper/daun tempe bekal in the tuckshop. So we would search out another place and that would be a bench near the school's servants' quarters. We would very quickly demolish our tuck and then ran off to play. When I recently went to Singapore I just had to take this photograph - of our hidey-hole at Pasir Panjang English School. (Today the school is being used by a Christian Mission Group to rehabilitate drug addicts) 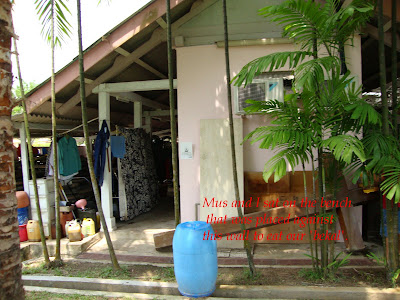 This little episode explained why the daun simpoh held such poignant memories for me. Today I feel very ashamed of my attitude towards my mum's bekal which she so lovingly cooked for us - for fearing the embarassment in front of my 'richer' schoolmates who had money to spend.

And now when I observe the younger set whose diet has been directed to fries, burgers and pizzas - when a kitchen has been turned into a room for display instead of a working, living and lively room , I wonder if this change can be likened to my reluctance to eat mak's nutritious home cooking in what is a commercialized setting? I can see the day when nasi lemak, lontong and mee rebus will be served straight from the microwave or oven to the table. It's already been done with Indian cuisine sold in British supermarkets.
Our parents' and grandparents' recipes will be tucked away in colourful coffee- table Cook Books to be ooh-ed and aah-ed over and sometimes experimented on.
Our food - its ingredients, its preparations and consumption is an essential feature of our culture. We neglect it and ignore it at our peril for that will entail the loss of our heritage. One certain and indeed a very easy way to de-culturalise and de-racinate a people is to change their food. Our daun serai, daun kunyit, lengkuas, daun kesum and daun limau purut will be served only at gourmet tables here and in the west while our children and grandchildren stuff their faces with western junk and fast food.
Posted by anak si-hamid at Sunday, November 15, 2009

i agree all local food already less people like to eat. most of them preferred like u said fries, burger etc.. so lucky if my mum still know how to cook, and our kitchen is always buzy every day hehe.. well only dislike if mum ask to buy the ingredients at the shop, but if makan part i'm very2 happy.. hehe AND now.. i miss my Mum cooks *crying waawaaa

ash seriously ur litlle bro hair same as mine during standard 1.. its called "belah tepi" hehe.. and did u have sunnyside up picture exacly like ur little bro pic?? if u got, mind upload it hehehe

and mums cook is still the besttt..

Yes please, the one at the Botanical Garden, both him and late Akim wearing the baju corboy.

Helas,
Let us see your photo with the 'belah tepi'please? And you've got a wonderful caring mum who cooks for her family - cooked with love.
When you go home the next time, help her with the washing up as well.


Sorry lah ph, I cannot find that picture of the 2 kobois lost at the Botanical Garden.

arghhh!! i wish i can find that photo of belah tepi.. i was searching for the photo also when i'm at hoemtown raya this year.. bur i couldnt find it.. the picture was at the report card hehe...

ok ASH will do that, but maybe i'm goin to cook if goin back hometown next time (^_^)

In the late fifties, when I was in primary school, I was given fifteen cents which I think were enough then to get an iced drink and a plate or bowl of something, like mee siam. However at recess the students who broght their bekal from home seemed to enjoy their food so much, I often asked my mother to pack me a bekal too. So she packed my bekal the way you described, but using the banana leaf instead of the tempe leaf. When you open the packet,the mixed aroma of the banana leaf and the rice soaked in lauk lemak ikan kembong with long beans or asam pedas with brinjals was just indescribable. I don't recall feeling embarassed. There were many of us eating our bekal in the playground, next to the canteen.

Thank you Corporal Matsah. Your mother packed a fabulous 'bekal'.
It's wonderful that you had so many other classmates who brought their own takeaways from home. For my brother and I we were really the odd one out because the catchment area for our school was made up of mainly middle class and very rich taukehs' children. And when you're 10 or so, we tend to have thin skins.
But despite this income gap it didn't stop us from mixing happily with each other during and after school hours. Because of our young age and because of that 'quietly innocent' political period in the 50s I would say that we were all colour blind, including the teachers.